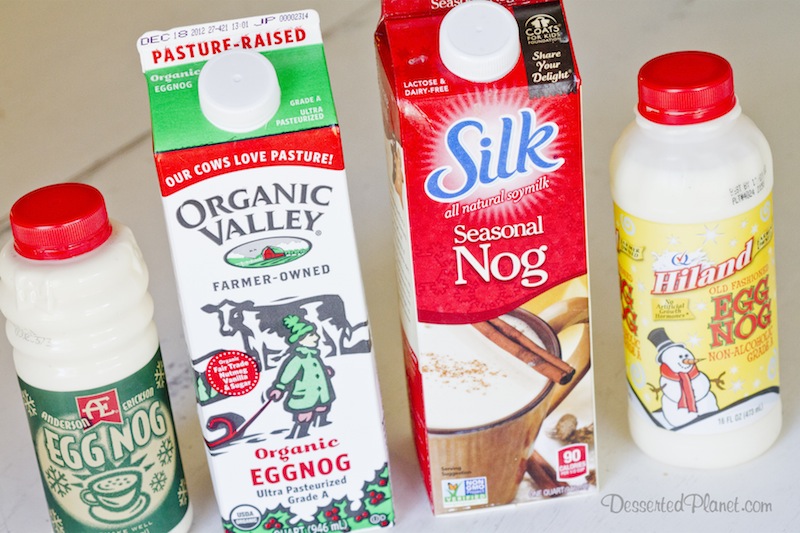 Little fact about me: I LOVE eggnog.  Love it.  Usually can’t keep it in my house because I will drink it…and by “it” I mean half a gallon in one sitting.  Luckily, my husband also loves eggnog.  I honestly don’t know what I’d do if he was an eggnog hater.  You know, one of those people that have no taste for the finer things in life–such as eggnog.  Ok, ok, I’m being a little melodramatic about the haters…ya’ll aren’t that bad.  And you have to have good taste because you’re on this blog!  But I really have to question your disdain for the sweet, creamy, delicately spiced liquid wonderfulness (umm, yeah, that’s totally a word) that is eggonog.  I’ve thought about what could make someone hate this delicious holiday drink and I can only come to one conclusion:  the name.  Think about it.  Eggnog.  EGGnog??  How appetizing does that sound, really?  Not much.  But it says little about the yumminess of this drink.  I’m fairly certain if someone tried rebranding it and naming it something along the lines of “Heavenly Melted Ice Cream Nirvana” or something, it would sell like never before.  Because that’s honestly what it tastes like!!  At least to me.  And that is why I love it so.  I can only hope that more people will come to love it as I do.

I did a little taste test.  This is totally unofficial.  I’m no expert.  I just love eggnog.  And doing a taste-test in the name of “research” for this blog, was a totally valid excuse to buy way more eggnog than I need in one lifetime, let alone the same day.  Man I have a hard job!

So I tried four different kinds.  It would have been five, but my absolute favorite brand, So Delicious Coconut Milk Eggnog, sold at our local health food store, hadn’t hit the shelves yet.  That stuff is creamy, thick, has a very slight hint of coconut and is dairy-free, which is what we do in our house (with the exception of this little experiment…obviously).  It’s amazing.  Anyway, I chose Hiland which is the brand both Jeremy and I grew up on, Silk Soymilk Nog they sell at Wal-Mart, Organic Valley from our local health food store and Anderson Erickson from Hy-Vee, which is a brand I’d never heard of until my friend Joel mentioned it. 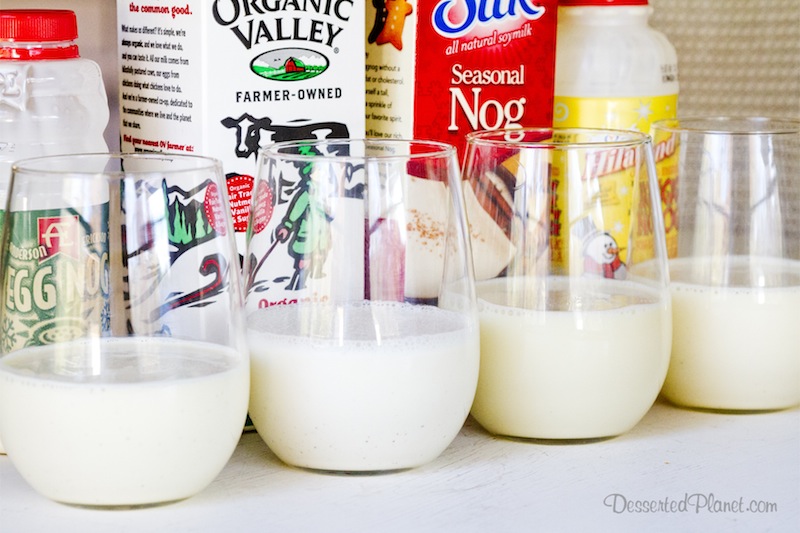 I’ll try not to bore you with all the delicious details and be as succinct as possible.  Let’s start with the least favorite, Silk Soymilk Nog.

Silk Soymilk Nog:  I actually bought this before I’d purchased any of the others and had been drinking it for awhile thinking it was a suitable substitute.  That was until I put it in this taste test.  Against the others it had a watery/skim milk consistency and a very noticeable nutty/soy undertones.  It will do if you’re dairy-free and need a fix but against the others, it was a big loser.

Anderson Erickson:  This was number three (sorry Joel), which doesn’t mean it was bad it just had to go somewhere in the ranking.  It was VERY SWEET, had no nutmeg fragrance and you couldn’t even really taste the spices, which I happen to love.  It was very thick and creamy and almost had a caramel taste to it.  Jeremy and I decided that it did, in fact, taste like melted ice cream!  Good, but too sweet for us.

Organic Valley:  This stuff was very good and not as thick and heavy as the others.  It had a more “pure” taste to it and you could smell and taste the spices.  I thought the flavors and sweetness were balanced nicely.  We both really liked this one.

Hiland Dairy:  This was our absolute favorite.  It was thick and creamy, not too overly sweet and had the perfect amount of spices/nutmeg.  We loved this one.  Just as we have loved it for all our lives since we were wee little ones.  Which could have something to do with why it ended up being number one!  Yay for childhood favorites! (Oh and p.s. Hiland had the least amount of calories, fat AND sugar BY FAR out of the top three!  Sweet!)

So, that’s my unprofessional, totally non-expert take on those four eggnogs.  And I’m dying to know…what is your favorite brand???  Do you even like eggnog?  Don’t worry, I won’t judge you if you don’t, promise. 😉

One Reply to “Eggnog vs. Eggnog”