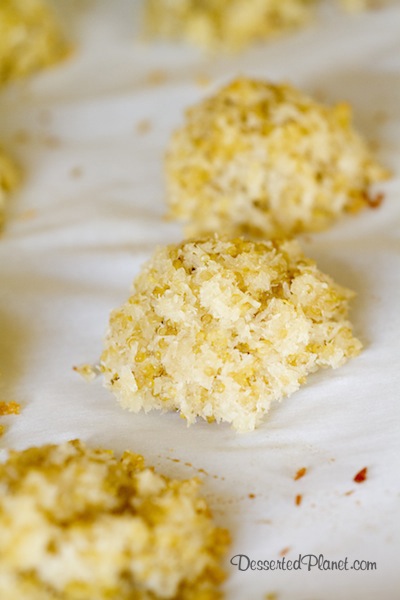 I made macaroons for the first time not once, but TWICE a couple of weeks ago.   And that’s macaroons, not macarons (which I love dearly).  There is sometimes confusion as to which is which, so this article might help clear things up for you if you are not sure on the differences.  Not saying you don’t know because I am certain my blog readers are dessert aficianados and semi-experts on all things sweet, but just in case…

The first version of macaroon I made was the healthified Quinoa Coconut Macaroon.  Totally yummy.  Could eat all of them in one sitting.  They are decidedly not like a regular macaroon but they are delicious nonetheless.  Jeremy even liked them and he despises coconut (so sad).  I like that they have protein from the quinoa.  Isn’t it amazing what you can put quinoa in?!  Of course, I had to add a bit of pure vanilla and almond extract.  Makes all the difference, in my opinion.

Later this week I’ll have a little blog post about my sister’s baby shower and the fun, themed dessert table I got to do which included the typical macaroons, along with the recipe!