There is a cute little bakery in Branson, MO that I have been DYING to try for a few years, called Sugar Leaf Bakery.   This past weekend I was finally able to stop in!  I had heard from both family and friends that they had great baked goods and fabulous wedding cakes.  The day that Jeremy and I went they had German Chocolate Cake, Key Lime Pie, Coconut Cake, Carrot Cake, Turtle Cheesecake and an assortment of delicious looking cookies.  So hard to choose!

For me, it was a toss up between the Key Lime Pie and the Coconut Cake but because I had heard they had amazing Coconut Cake, I went with that.  And oh my, was it good.  The cake was moist and dense and the coconut filling was super gooey.  It was all covered in a light whipped cream frosting and toasted coconut.  It had a great balance of flavors and wasn’t sickening sweet so that was nice.  I also got a jumbo snickerdoodle cookie that was chewy, cinnamony and delicious. 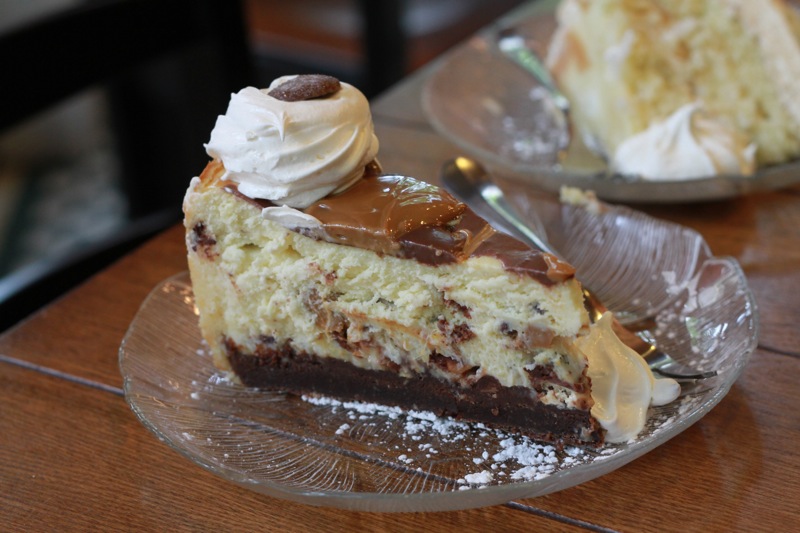 As for Jeremy, he apparently was filling the whole caramel/chocolate thing because he got a massive slice of Turtle Cheesecake and a Turtle cookie.  And I have to admit, he chose well.  The cheesecake was a dream.  Seriously.  First, you had a thick layer of chocolate cookie crust which was filled with the creamiest, smoothest vanilla cheesecake filling I think I have ever had.  The cheesecake filling had shavings of dark chocolate all through it and finally the whole thing was topped with a layer of caramel and drizzled with chocolate.  After the first bite I wanted to yank the plate away from him and scarf the whole thing down.  But I refrained.  I have to say, it was probably the best cheesecake I’ve ever had.   And I always thought I made fairly good cheesecake but this one definitely inspired me to improve on my own recipe.  The Turtle cookie was great also…a nice thick chewy chocolate cookie with a pool of caramel in the middle, sprinkled with chopped pecans.  Mmmmmmm!

They also had great looking salads, soup, paninis and other sandwiches.  We are already planning to go back and try lunch sometime and I fully intend to have a slice of that Key Lime Pie!  Do NOT miss this place if you’re in the Branson area–you are definitely in for a treat!

One Reply to “Sugar Leaf Bakery”