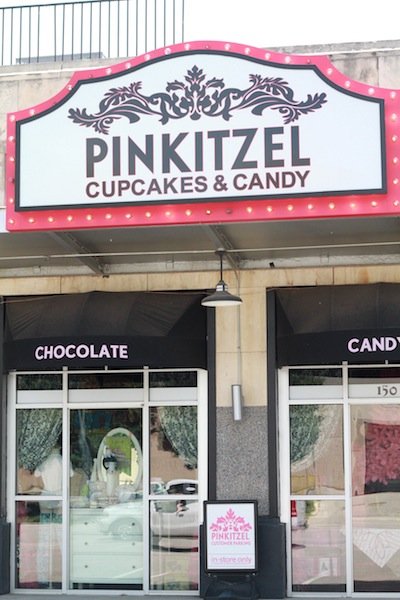 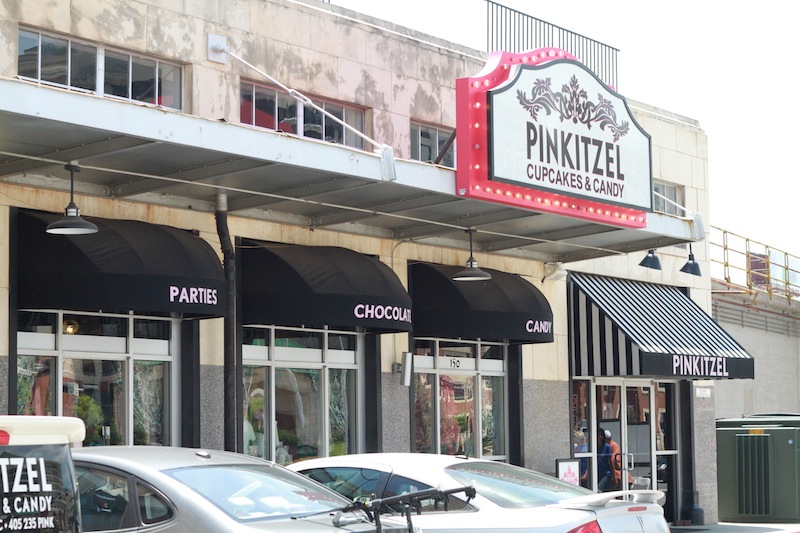 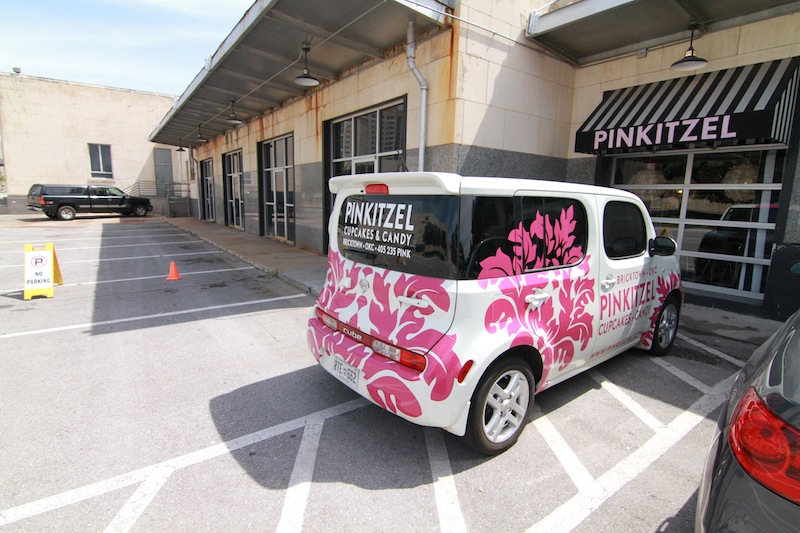 Warning:  This post contains many pictures.  I apologize in advance.  However, I originally had 50 and managed to narrow it down to 20.  And yes, I know you’re dying to see ALL 50 so I have a slideshow at the very end of this post with every. single. photo.

Ok, so I’ve talked about the little trip Jeremy and I took to Oklahoma City and the bakeries we visited, here and here.  But I have saved the best for last.  Pinkitzel is the sole reason I wanted to go to Oklahoma City.  Ever since finding them online a few months ago, I have been absolutely DYING to visit.  And I finally got to!  Since I have ambitions of opening my own candy shop one day, Pinkitzel is a MAJOR inspiration in my book.  I was so excited to go.  Probably too excited. 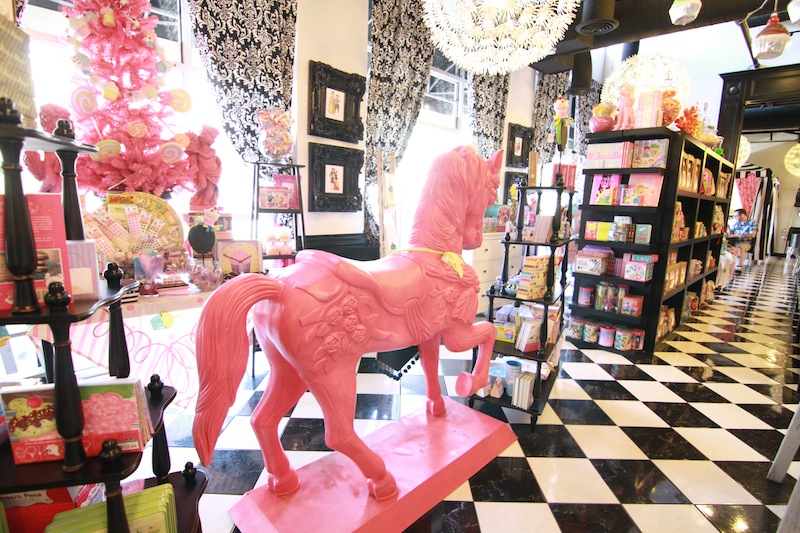 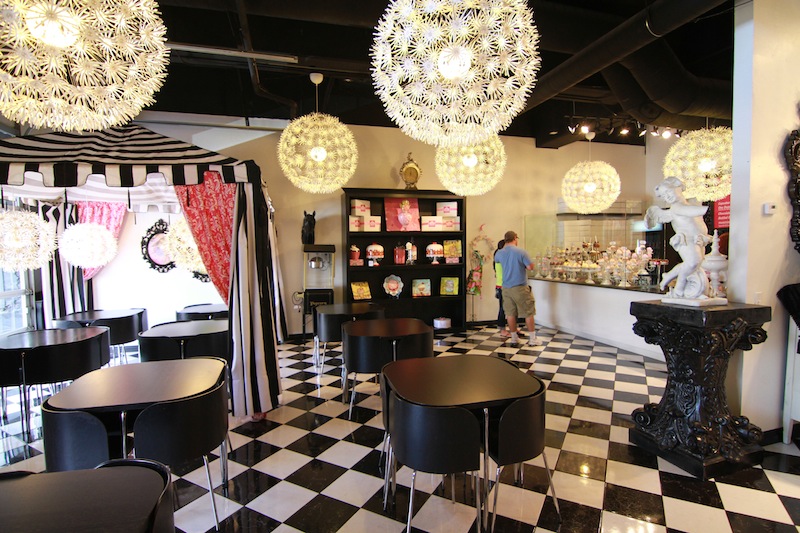 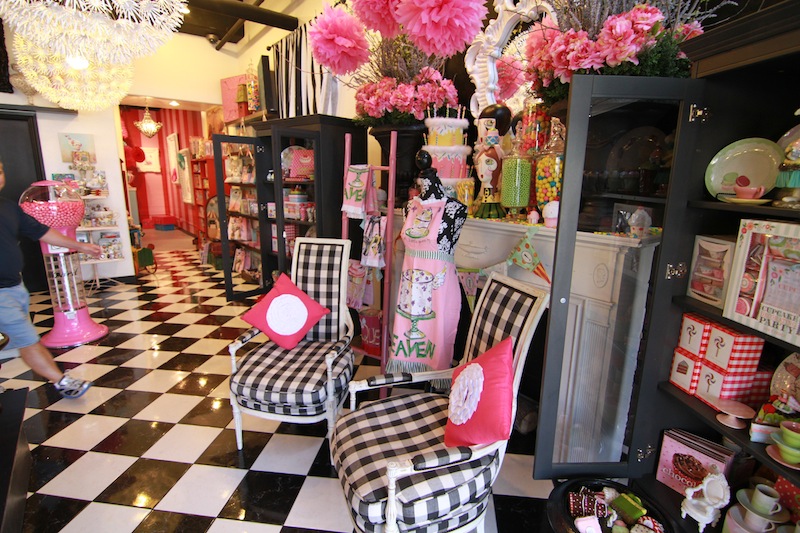 From the moment we walked in, I tried to contain myself but it was hard!  I’m sure the employees thought we were nuts…Jeremy taking pictures, me jotting down notes…yeah, we looked crazy.  At least I felt like I did.  But I didn’t care!  I was in candy heaven and no one was raining on my parade.  First off, the decor is AMAZING.  Totally my style and pretty dang close to what I’d choose for a store of my own.  It was black, white and hot pink with a rococo/baroque feel to it.  The party rooms were out. of. this. world.  There is a black and white one that could be accented with the colors of the person’s party/event they are having.  I believe the room was set up for an engagement party when we were visiting that day. 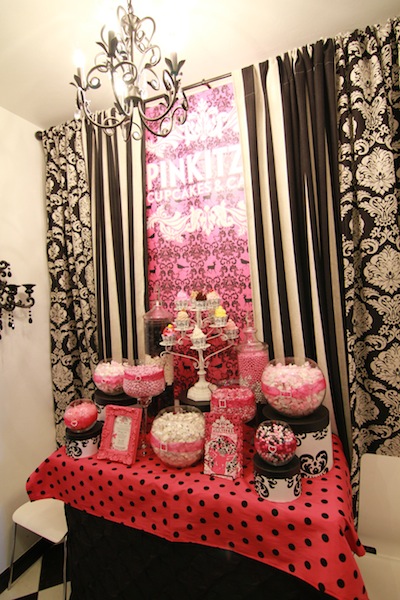 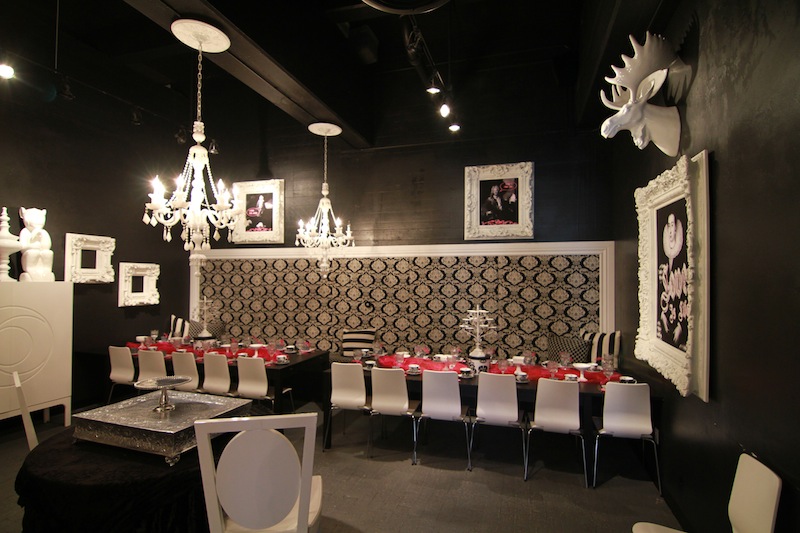 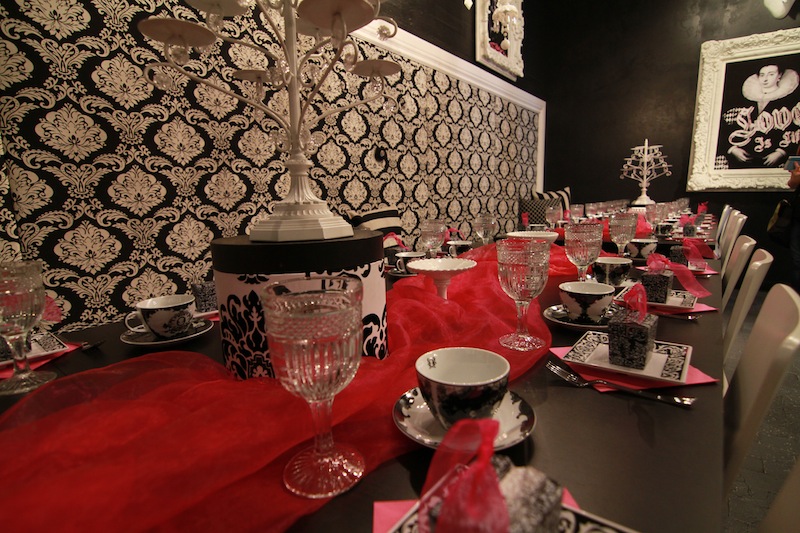 And then you have a red/pink room that is very girly and a little smaller, probably more for a young girl’s birthday party or even a bridal or baby shower.  Both of the rooms were so neat and over the top, pretty much like everything in the store. 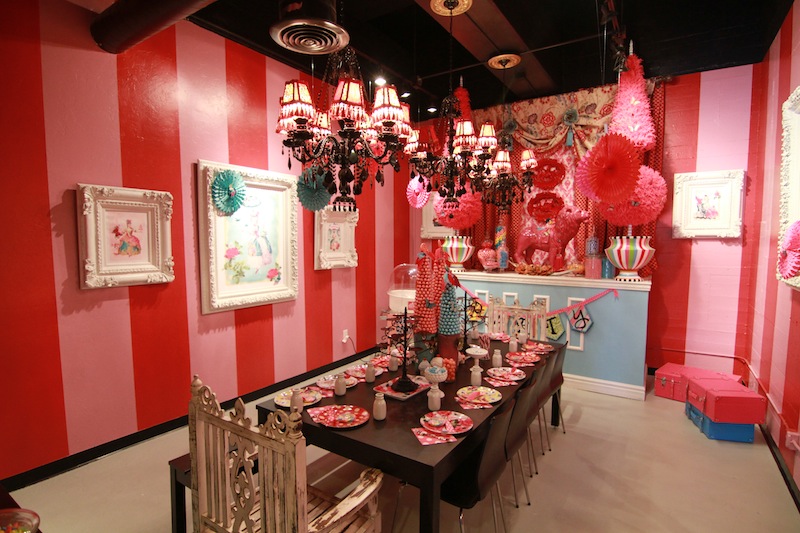 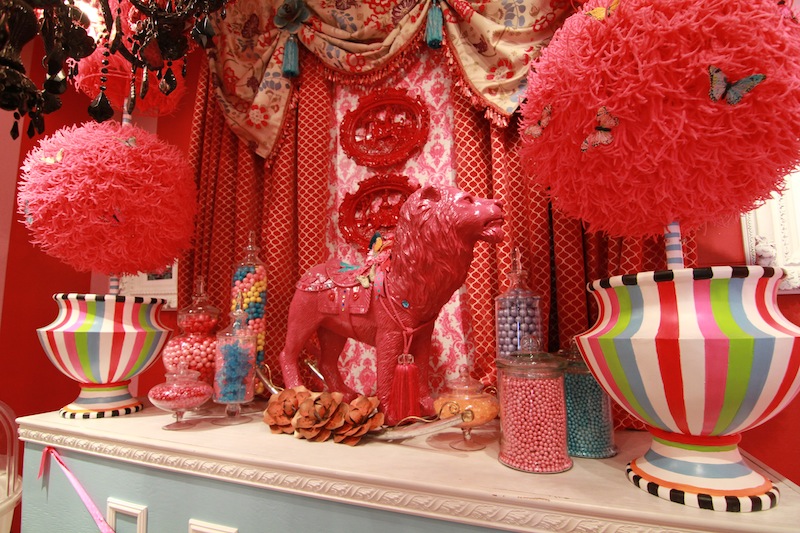 There were also tons of fun merchandise and nicknacks and novelty gifts. 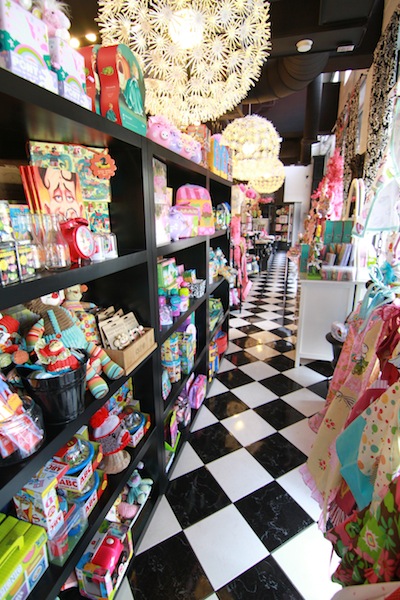 And the candy.  Oh, the candy.  So much to choose from.  I tried to be really picky but still get a good variety–at $3.75 for 1/4lb, this stuff wasn’t cheap!  But I can honestly say, it was totally worth the price.  A million times better quality than the stuff you’d get somewhere else (like our local shop in Springfield, Mr. Bulky’s) and the selection was just phenomenal. 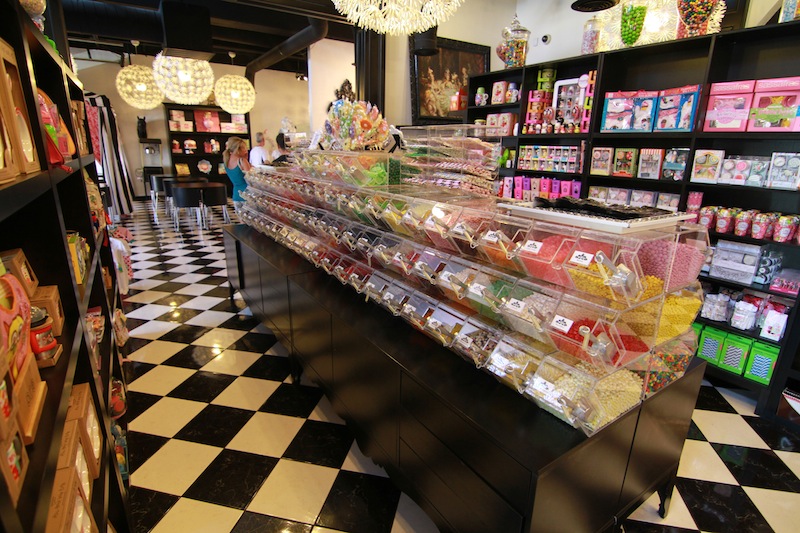 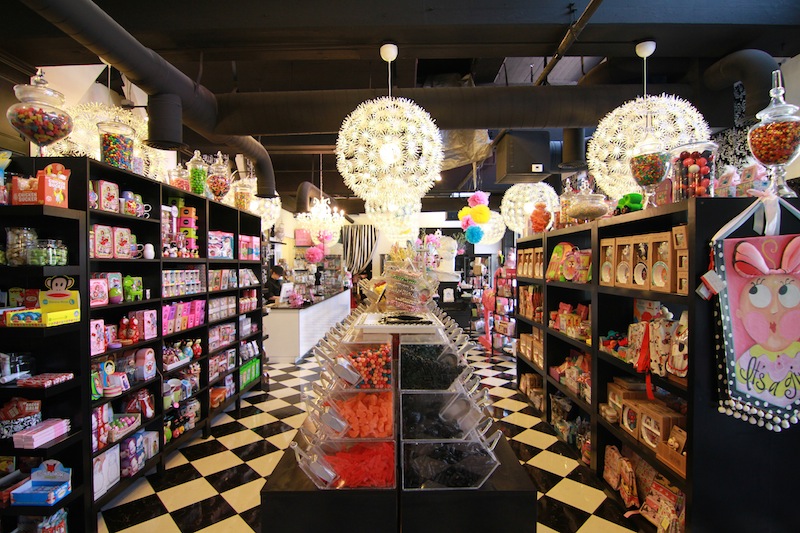 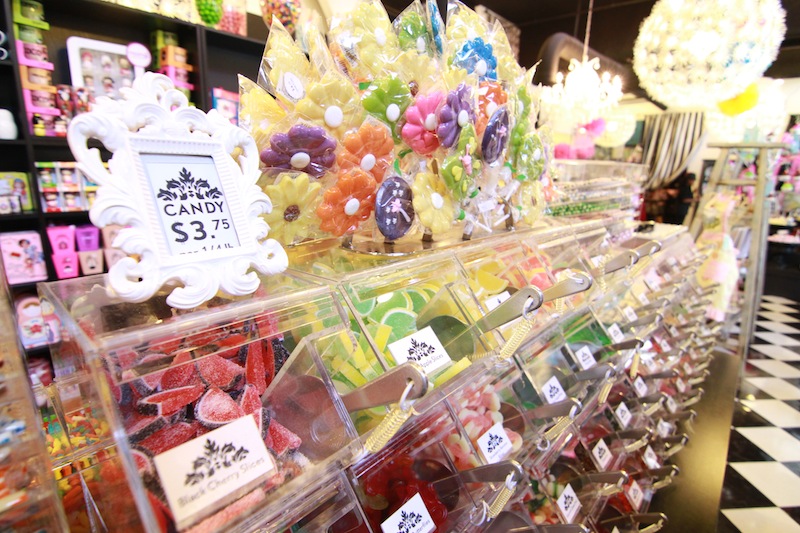 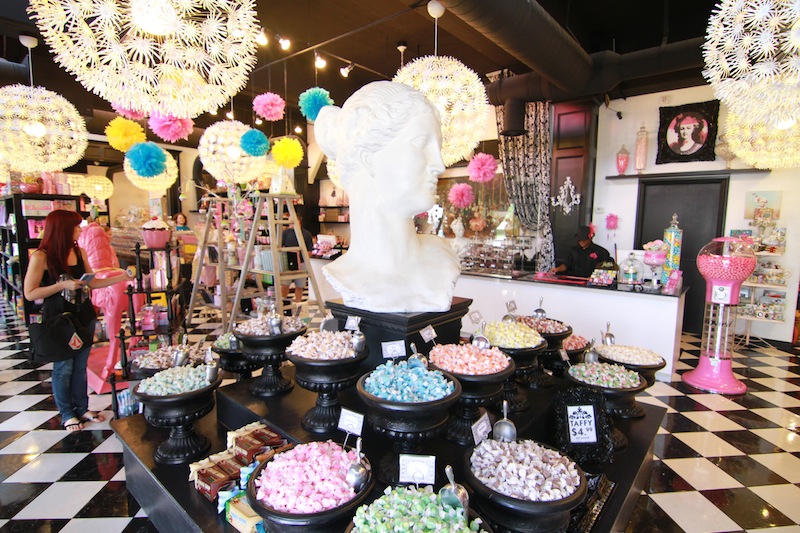 My only regret about this place was spending $9 on three, yes THREE, cupcakes that were horrible, instead of using it on more candy.  Yes, you are doing the math correctly…$3 each.  I had read reviews that people posted online saying the cupcakes were from somewhere like Sam’s Club and just frosted different colors and sure enough…that’s what they were.  Except I like the cupcakes from Sam’s Club (shocker, I know) and I definitely did NOT like these.  They were even smaller than a regular size cupcake (if you can imagine that) and so loaded with artificially flavored frosting they were nearly inedible.  Let’s just say it was a good thing we were sitting right next to a trash can.  They also had a selection of chocolate truffles that were decent.  Not the best, but definitely ok. 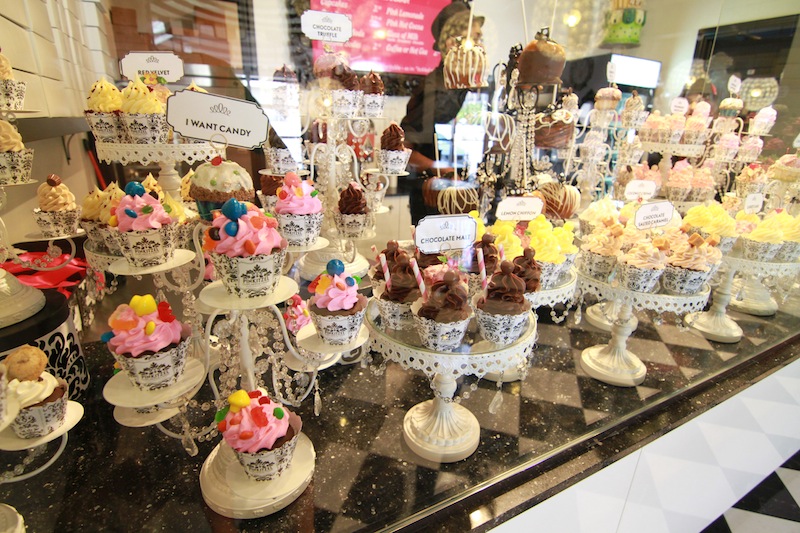 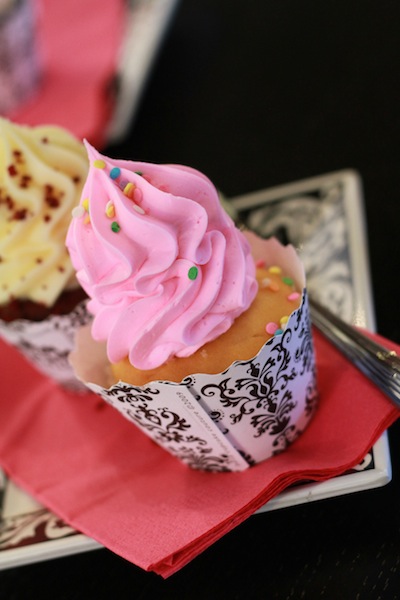 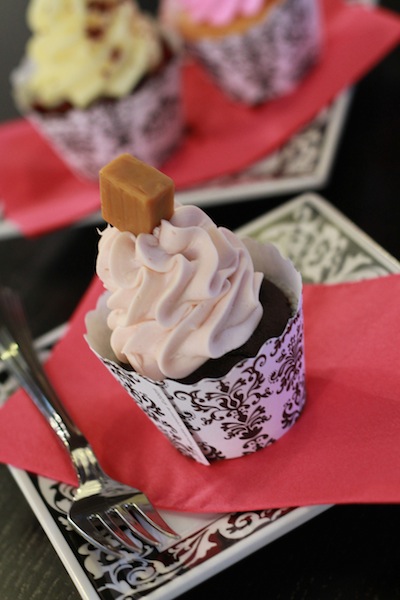 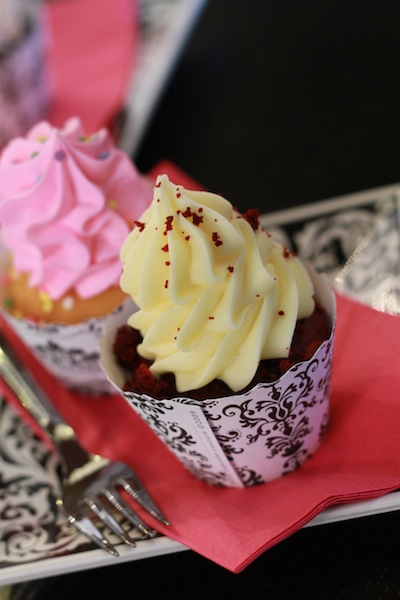 BUT, the candy more than made up for the cupcakes and truffles.  I think it’s clear that the main product focus is the candy and it’s worth every penny.  I truly wish I’d just stuck with candy but I have no doubt I’ll be back to this place.  It’s sensory overload in every way and I love it!  Definitely make sure you stop in if you’re ever in the area!