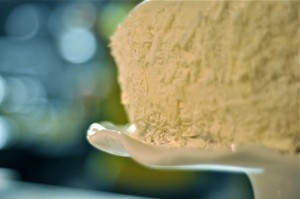 A few weeks ago I learned a very important lesson all over again: be careful what you ask for. In my newly wedded blissful ignorance I asked my husband of four months what he’d like me to make for his birthday dinner on December 11. Everything from scratch, of course. He laid out the menu in no time and then to top it all off requested the Red Velvet Cheesecake from the Cheesecake Factory (which we had tried for the first time a couple months beforehand). Umm, ok, no problem.

The next day I formed a plan of attack. First step: find picture of the cheesecake from the Cheesecake Factory. From there I determined the order of layers, what went between them and the cosmetic enhancements needed. Second step: the recipes. I recalled seeing a recent episode of “Throw Down with Bobby Flay” on the Food Network Channel in which he competed in a red velvet cake contest and although I can’t remember if he won, I knew his recipe had to be good. So, I had my Red Velvet recipe. I didn’t change a thing except I used a whole bottle (1 oz.) of red food coloring for that really deep, brilliant red color and I baked it in two, 9-in. pans greased and lined with parchment paper.

For the cheesecake I went to allrecipes.com and found one that had great reviews. It turned out amazing! I honestly can’t wait to make it again the next time I want a good cherry cheesecake. Third step: assembly. This made me fairly nervous because I really haven’t made a ton of cakes and I don’t ever remember making a layered cake, so I was a bit concerned. But I gave myself a little pep talk, whipped up a simple cream cheese frosting and began construction. To my utter amazement everything sliced up and transferred fairly easily.

Each layer got a slather of frosting and when all stacked, received a crumb coat and then into the freezer it went to firm up. Final step: cream cheese frosting and a layer of shaved white chocolate applied to the sides of the cake to beautify it. End result–a very pretty cake/cheesecake that tasted even better than it looked! Oh, and in Jeremy’s words it was “better than the one from the cheesecake factory”. I think he was under the influence of a very rich birthday dinner and a large amount of sugar at this point. Hah. But it was darn good. 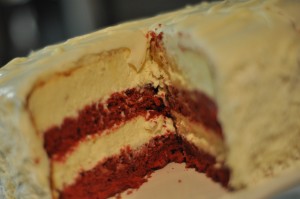 One Reply to “Red Velvet Cheesecake”