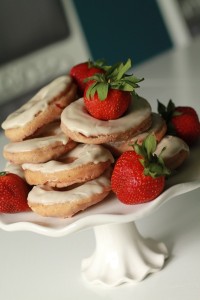 I had really grand plans for breakfast today.  I mean, it was going to be a breakfast of epic proportions, unmatched anywhere, in any kitchen in Springfield, MO. Nothing would go wrong and everything would be AWESOME.  Right?  Right????

Yeah, not so much.

I’ll cut to the chase.  First, the doughnuts.  I wanted an old-fashioned, strawberry cake doughnut.  The batter came together easily but was quite sticky which required an absurd amount of flour on my counters, rolling pin and hands.  And they fried up nicely but I won’t lie…they weren’t the soft, moist cake doughnut I had in my mind.  The texture was dense and almost the teensiest bit chewy.  It could have been my tinkering with the recipe that doomed them so I will most likely try another recipe and omit MY changes next time.

And finally, the milk punch, apparently popular in New Orleans and really how can you go wrong with heavy cream, sugar and vanilla?  It turned out good.  Really, really good.  Of course this was after I let it thaw from solid milk hockey puck to nice slushy drink.  Whatever you do don’t leave this stuff in the freezer overnight.  No matter what any recipe/blogger tells you, it’s a bad idea.  Stick to 3-4 hours and you should be safe.  The recipe calls for alcohol of some sort (think eggnog alternative) but for those of you who don’t care for booze, feel free to just leave it out.

So at least try the milk punch, it’s totally delicious.  And as for the doughnuts…by all means, suggest a recipe if you have a good one!

In a large bowl or pitcher, whisk together milk, heavy cream, bourbon, vanilla, and sugar.  Freeze until slushy, 3-4 hours.  Stir before serving in chilled glases. 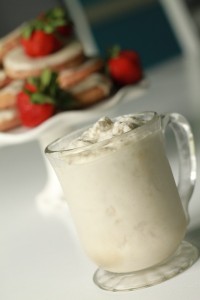