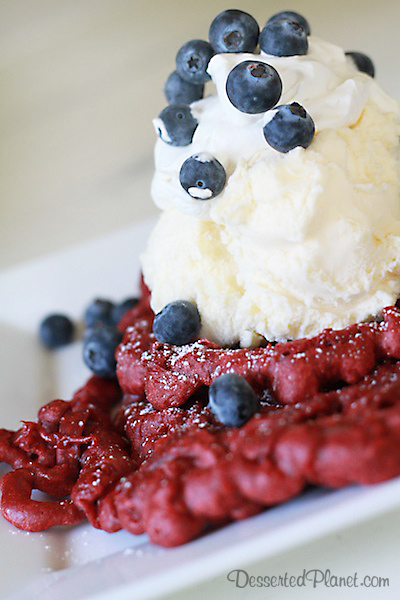 My niece is a genius.  Yes, she is one of the sharpest, brightest, most creative and beautiful little girls I know.  But I’ve now confirmed she is a CULINARY genius as well.  My sister-in-law, Rachel, had mentioned a loooong time ago that Joslyn misunderstood something she said once and mistakenly thought that she and Rachel were going to make red velvet funnel cakes, instead of cupcakes.   Ummm, can you say brilliant?!?  I immediately tucked the idea away in the back of my mind knowing one day I’d get around to it and I am so happy to finally announce that day has come!

Now I’ve only made funnel cakes once in my life when I was a kid and I seemed to remember it being fairly easy and so, so fun and most of all extremely YUMMY.  The same can pretty much be said this time around but I must have forgotten how MESSY it was.  Umm, yes, this was messy.  I’m just going to be honest–get a funnel cake pitcher.  There’s a reason they make these, people.  Do not attempt to use a pastry bag fitted with a large tip (like I did) or a ziploc bag with a corner cut off.  I basically had to hold my finger over the hole of the tip while Jeremy poured the batter into the pastry bag (it turned out to be a VERY loose batter) and then release it into the oil  Don’t get me wrong…it worked.  Oh it totally worked.  But messy?  Yes.  And I HATE messy.  As a matter of fact, you could probably even use an empty, clean ketchup bottle which I know a lot of people do for pancake batter, which has a very similar consistency and would be much more controllable.  If only I had thought of that before… 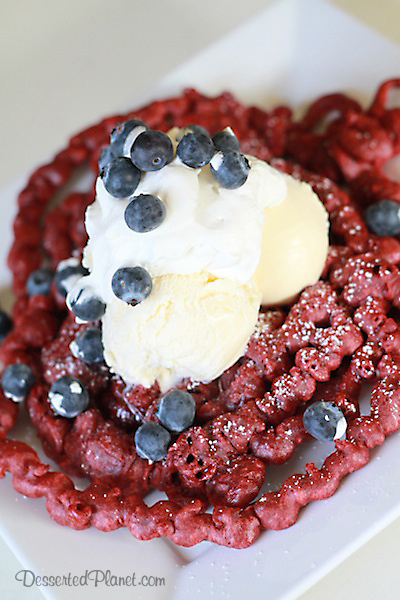 Besides the messy factor, this red velvet funnel cake was super easy to mix up, required an absurd amount of red food dye (eek!) and was ABSOLUTELY DELICIOUS with a generous amount of powdered sugar, vanilla ice cream, homemade whipped cream and fresh blueberries.  And if you want just a plain funnel cake but still want to be patriotic, just dye the basic recipe red or blue and voila!  I think it is such a fun dessert for the 4th of July!

Print
Red Velvet Funnel Cake
Ingredients
Instructions
Notes
Makes 5 large funnel cakes. Note: This is NOT a sweet funnel cake, which is why I recommend topping it with a generous amount of the powdered sugar, whipped cream, ice cream, etc...it pairs perfectly with those things.
Wordpress Recipe Plugin by EasyRecipe
2.2.7
Facebook Comments