This post is a little late but I wanted to be able to devote enough time to writing and adequately expound upon a near life changing dessert encounter I had recently.  I know, I know it seems slightly dramatic but I am not exaggerating one bit (well, ok, maybe a teeny tiny bit).  Let me explain…

The weekend before we moved to Missouri, we headed into Chicago one last time for some sightseeing and of course, food.  Initially I wanted to do a Chicago bakery mini marathon, but after coming to my senses I realized this would not only cost me waaaayyyy too much in dollars but most likely in pounds too so I decided to narrow it down from six to two.  I had done my research and was ready; I had high hopes for one and not-so-high for the other but the place sounded fun and kitschy so I had to try it.

We started the day with a little French pastry shop called Vanille Patisserie, owned by husband and wife team Dimitri and Kell Payard. Dimitri is originally from France where he received his culinary traning and Kell is Chicagoland native who attended the Culinary Institute of America.  Between the two of them they’ve won numerous awards and after indulging in their beautiful creations, I can see why!  Their French macarons are absolutely delicious.  When you bite into one of these colorful, delicate cookies it is crisp on the outside but airy and chewy on the inside.  The ganache and fruit fillings are spread thin but bursting with flavor.  The girl at the counter let me try a Coffee macaron.  So good!  Jeremy decided on a Red Velvet and Vanilla and I got Pistachio and Raspberry–we loved them all!  We also chose Chocolate, Nutella and Coconut Papaya macarons to-go. 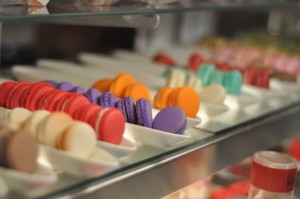 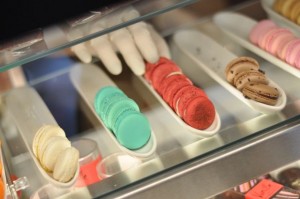 After much deliberating–mainly by me–we also chose an entremet, or mousse cake, to share.  I honestly couldn’t decide.  Everything looked so delicious so we went with what the girl behind the counter suggested, the Entremet Vanille, and it was definitely the perfect recommendation.  It consisted of a layered mousse cake with a sable (think thin shortbread type cookie) on the bottom, covered in a mango glaze.  The mousse was light and creamy, not at all heavy and the flavors of vanilla, mango and coconut were balanced perfectly.   It was small but to be honest, it was so flavorful that it was really the right amount to share.  Not that I wouldn’t have eaten another one.  Because I really, really wanted to. 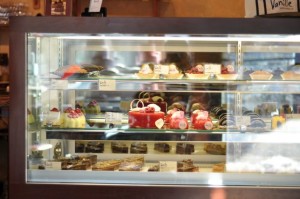 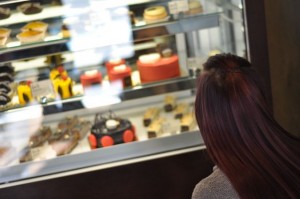 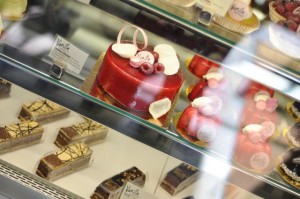 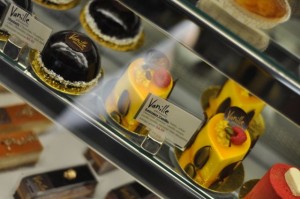 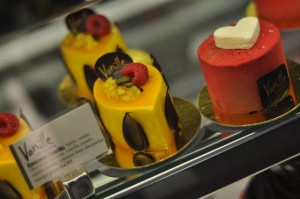 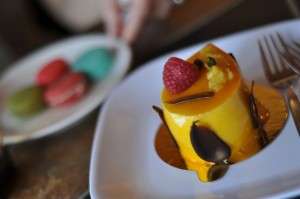 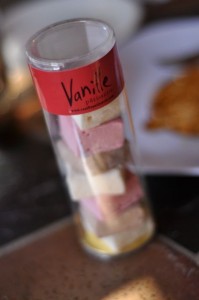 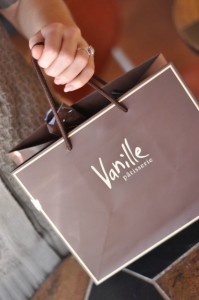 So the day started off wonderful!  We drove around a bit, ate a late lunch/early dinner at a place called Gino’s East (apparently famous for their deep dish–we got thin crust, hah!) and then headed off to find the next and final stop, Angel Food Bakery.  The place really intrigued me because it was retro themed and the desserts seemed fun and different.  With offerings like homemade Twinkies, S’mores, Boston Cream cupcakes and Whoopie Pies, how could you go wrong, seriously?!  But oh my, you can go wrong.  Very, very wrong.

Here’s a pic of the inside. So deceptively cute and inviting.  The walls are lined with every make and model of Easy-Bake Oven. 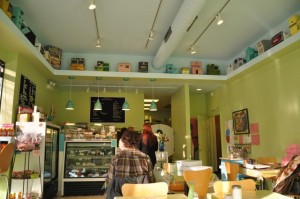 I chose the Coconut Cupcake.  It was huge and looked soooo good but was extremely disappointing.  The only thing “coconut” about this cupcake were the flakes that had been sprinkled on top.  The cupcake and frosting were both vanilla and the cake actually tasted like they had gotten a little crazy with butter flavored oil.  Very weird.  And the worst part of all–it was dry.  As in desert.  Ick.

Jeremy got somewhat lucky with his pick, a Boston Cream Cupcake.  Again, huge and screamed “eat me!” but it wasn’t anything to write home about.  The chocolate goo on top and the custard filling helped mask another otherwise dry and tasteless vanilla cupcake. (I think the red fondant hearts on top were the best part.  Yikes.) 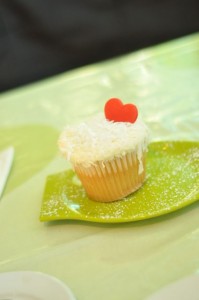 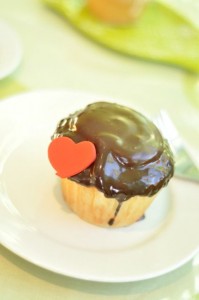 We also split a made from scratch, chocolate dipped S’more.  Horrible.  Didn’t even deserve a picture. We both left feeling a little sugary sick to our stomachs.   Such a sad way to end the day when it started so well with this: 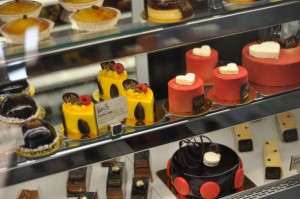 All in all it really was a great day and a bittersweet farewell to Chicago.  I was finally introduced to some real French pastry and I can now understand why they might be a tad snobbish about those sweet little creations they craft.  The focus on taste, flavor, texture and color is so unlike the heavy, sugary desserts that Americans are so accustomed to. The French know how to make something so small taste so delicious that you are satisfied with just a few bites and don’t feel the need for gigantic portions or seconds.  Or thirds.  Or fourths.

It really is amazing.  To me, at least!

But I still love me some Red Velvet cake and cream cheese frosting.  🙂