I had heard about a new bakery in Hollister, MO, The Catering Divas Divalicious Bake Shoppe (what a name!) and got my chance to stop in and visit a couple weekends ago after a trip to White Water in Branson with my sister and her husband.  I felt a little bad dragging them along for my “research” but they didn’t seem to mind.  After a short little drive right down into the heart of downtown Hollister, we arrived at our destination.  I was a little shocked to learn the bakery was just a tiny room off of a bar, so that was a little off-putting at first but the space was cute inside.  On the small countertop were a few pieces of pineapple upside down cake, cookies, brownies, a couple of pastries, a few cake pops, zucchini bread, some quick breads and rolls and a few chocolate cupcakes in the refrigerator.  I thought they’d have more to choose from because they supposedly stay open until 10 p.m. on Friday and Saturday so they might have had a rush that day, but we still managed to choose quite the selection between the four of us.

The things we chose were cupcakes (chocolate with peanut butter buttercream and chocolate with vanilla buttercream), red velvet cake pops, a brownie and a slice of pineapple upside down cake.  The pineapple upside down cake was good but I probably wouldn’t get it again (only because everything else we got was way better).  The brownie was really yummy, more cake-like with a chocolate glaze, drizzled with caramel and sprinkled with pecans.  The red velvet cake pops were also really, really good and not sickeningly sweet like a lot of cake pops I’ve tried.  Possibly the best cake pops I’ve had yet!

And finally, the cupcakes were delicious.  They only had a few chocolate varieties left (I typically like to try white cake with vanilla buttercream).  The chocolate cake part was very moist and had a mild chocolate taste and both the peanut butter and vanilla buttercreams were amazingly smooth and not too sweet…I think the frosting might have actually been an Italian or Swiss buttercream because it definitely did not taste like a typical powder sugar buttercream. 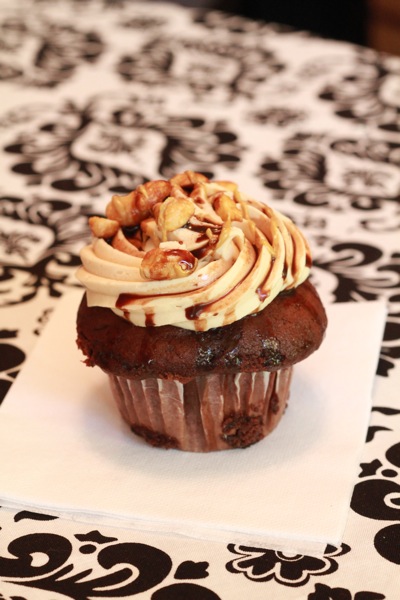 As for the prices, they were very good, if not even a little low on some things.  Jeremy and I got four items and only spent $7.  Overall, we liked the treats very much–you can definitely tell that the owner knows her cake!  I’m already thinking about stopping by for a cupcake the next time I’m in Branson.  Let me know if you’ve been there or plan to stop by sometime soon–I’d love to hear your thoughts!