Disclaimer:  These pictures were taken with my phone.  At night.  Sorry.

I recently took a whirlwind trip to DC to visit one of my best friends, Joelle.  I had already visited once a few years ago and got the full tourist experience–we hit up all the landmarks and historic places.  It was awesome!  So this time we did something a little different than most people do who visit DC:  we had one HUGE girls weekend with shopping and eating 24/7.  It. Was. Awesome.

One of my stated goals while I was in DC was to hit up a few cupcake shops that we didn’t have in little ‘ole Springfield, MO; namely Sprinkles and Georgetown.  These two are probably a couple of the best known bakeries in the country thanks to TV and I had to see what all the hype is about.  We also got around to Alexandria Cupcake and a bonus bakery that a random lady at Sprinkles told us about called Baked and Wired, but for now I’ll start with our least favorite of the four:  Sprinkles.

Yes, I know.  How could I?!  Everyone loves Candace Nelson on Cupcake Wars.  She’s the pretty judge, the cupcake queen, the “founder of the world’s first cupcake bakery”, etc, etc.  But I have to be honest…I simply was not impressed with her cupcakes like I thought I would be.  They weren’t horrible, just not exciting and amazing.  The flavors were very reserved and honestly kind of boring (much like the small, two-table storefront!).  We chose Vanilla, Chocolate Marshmallow, Chai Latte and Cinnamon Sugar.

Cinnamon Sugar was the least favorite…I guess we didn’t get the memo it was sans frosting and more close in likeness to a buttermilk cinnamon sugar muffin.

Next, Chocolate Marshmallow…the cake was a good, mild chocolate cake but it just barely had a dollop of marshmallow creme in the middle and a thick layer of chocolate over the whole cupcake.  It was just ok also.

Joelle and I agreed the Chai Latte was definitely the best one with a yummy chai flavor throughout the cupcake and frosting. Oh, and those little dot things on top?  Definitely NOT edible. 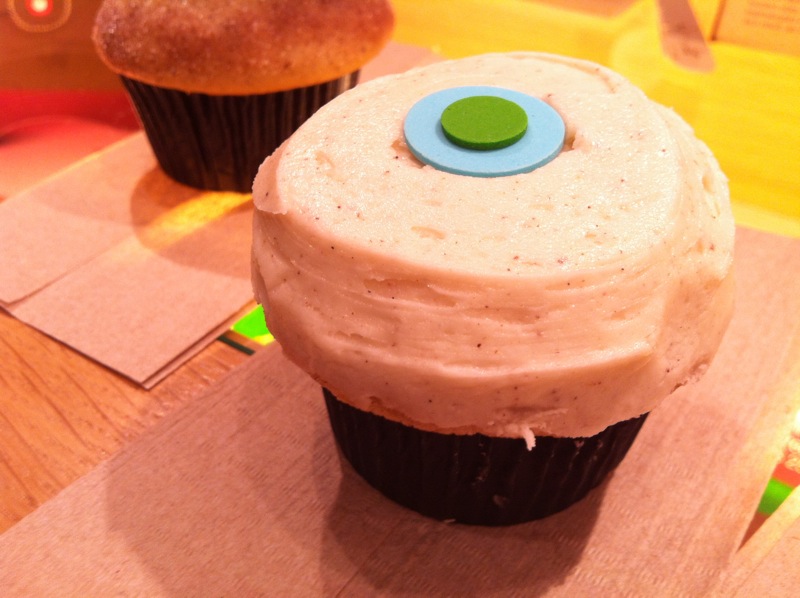 So Sprinkles was indeed a bit disappointing but things only got better from there.  I’ll have three more reviews of the other bakeries coming over the next three weeks so stay tuned!  But before you go I have to ask–have you ever been to Sprinkles and if so, what was your impression??  Did you like it?  The best you’ve ever had or have you had better??  I’m curious!