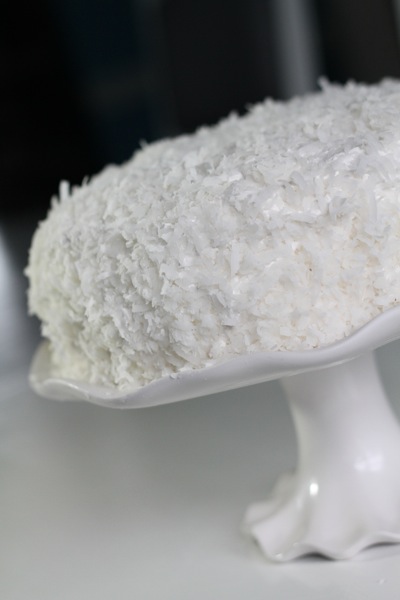 Believe it or not, I have never made a homemade coconut cake and honestly, I have no idea why!  I love coconut in anything so I’m not sure what took me so long to get around to it.  Thankfully, I made some baking resolutions this year and classic recipes was one of my goals for the year.  This cake was the first step to meeting that goal and what a delicious resolution it turned out to be!  I wasn’t sure what recipe to use so I simply googled “coconut cake” and the first thing to pop up was a Paula Deen recipe that had LOTS of good reviews so I thought, why not?  I’ve not made alot of her recipes but I know her Ooey Gooey Butter Cake is one of my favorites so I thought I’d give the coconut cake a shot.

Initially, I had some reservations about this recipe.  First, the cake recipe itself called for self-rising flour which I thought was odd since self-rising flour is typically used for biscuits and such.  Second, the filling was a sour cream and sugar mixture which in my mind wouldn’t be nearly as good as the fluffy, whipped cream like filling that seems to be in all coconut cakes.  And third, the 7-Minute Frosting recipe was new to me and sounded somewhat complicated so I was tempted to just do a typical buttercream or cream cheese frosting.

But I decided NO. I would try my hardest not to make any changes…and that is HARD for me to do.  But I have to say I am SO glad I didn’t change things…this cake was delicious!  Not the coconut cake I had in my mind necessarily but still soooo yummy and good.  The cake itself was tender and soft, although it was a little crumbly but overall I liked it and it was kind of a cross between a white and yellow cake.  I have to admit that I LOVED the filling.  I mean, I could have just eaten it with a spoon.  It seeped down into the cake an made it very moist.  I would only change the amount of coconut in it, maybe increase it to one cup because I would have liked more coconut between the layers.  And finally the frosting turned out to not be complicated to make AT ALL and I loved that it was similar to marshmallow creme but infinitely better!  What I really loved about the frosting was how easily it went on the cake–I was a little scared because it was so gooey and sticky.  But surprisingly not hard to work with at all. 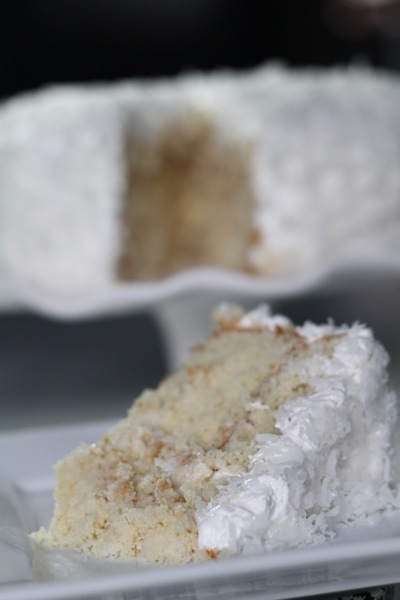 All in all, this was a great first-ever homemade coconut cake.  My in-laws loved it which made me VERY happy and my mother-in-law said it reminded her of her mom’s coconut cake and I thought that was awesome!  Can’t wait for my next classic cake recipe!