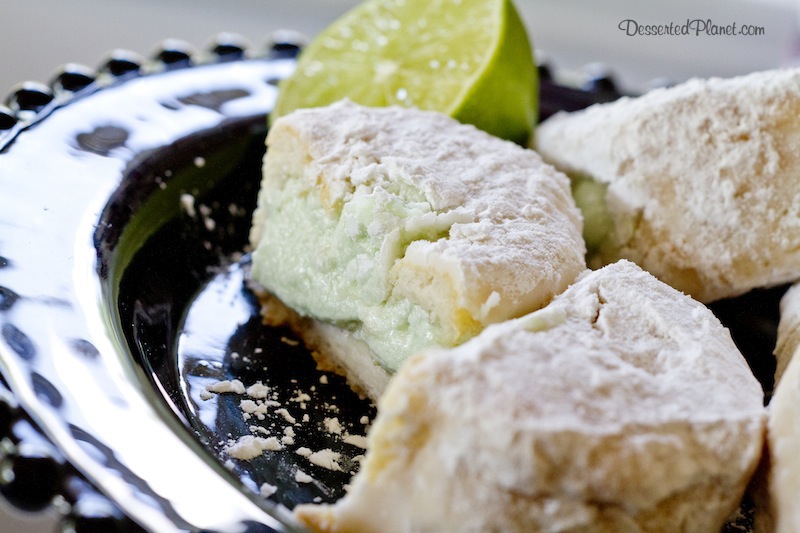 Doesn’t the title of this post make your blood sugar skyrocket just reading it?  It does mine!  As it should because these doughnuts are loaded with LOTS of sugary goodness.  After I made Key Lime Pie, I still had some key lime juice I wanted to use up so it wouldn’t go bad.  I really wanted something easy and I remembered the buttercream recipe that was part of my key lime roundup so I thought that would be delicious to try out!  Although…I wasn’t feeling cake or cupcakes.  Hmm, sandwiched between cookies?  Nah, not it.  Then it hit me…DOUGHNUTS.  I literally felt like I was a mad scientist and brilliance had just struck me!  A loooong time ago I had made these super easy doughnuts (notice this was when I was a beginner blogger and wanted to achieve that Bakerella look…and uhh, DIDN’T haha) and they were so dangerously good that we ended up eating an obscene amount within minutes and I had not even dared to make them since.

But the time had come.

So I fried.  And powdered.  And filled.  And powdered again.  And behold, deliciousness was born.  The key lime buttercream was outstanding.  It would definitely be wonderful on cupcakes or cookies.  And the doughnuts, well, they were fried to perfection and so wonderfully doughy and warm…ahhhh.  My poor husband split a half of one with me and was then tortured the rest of the night with the knowledge that they were just sitting in the kitchen, mocking him.  But he resisted and I was very proud of him for that!  We strongly believe that desserts should be treats and not something to eat in massive quantities (unless doing bakery research..ahem) but these doughnuts made doing so extremely difficult.  Extremely.

Print
Key Lime Buttercream Filled Doughnuts
Ingredients
For the Doughnuts
For the Key Lime Buttercream
Instructions
To Make Doughnuts
To Make the Buttercream
Notes
Makes 8-16 doughnuts. *How many doughnuts you want will depend on how full you fill them. I only made 8 and I had some frosting leftover but if I had done 12 or even 16, I would have just filled with a little less buttercream in each one and it would have filled all of them.
Wordpress Recipe Plugin by EasyRecipe
2.2.8
Facebook Comments