Jeremy and I had a little date night this past Friday night in downtown Springfield, MO.  We started out by getting dinner at Grad School (AWESOME wings and burgers) and then went directly across the street to grab dessert before seeing Another Earth at The Moxie.  For dessert, we went to a new place called Side by Side Dessert Lounge.  It’s actually connected to a restaurant called Blu Sesame and I think the idea is you eat dinner there and then go immediately next door and get dessert. 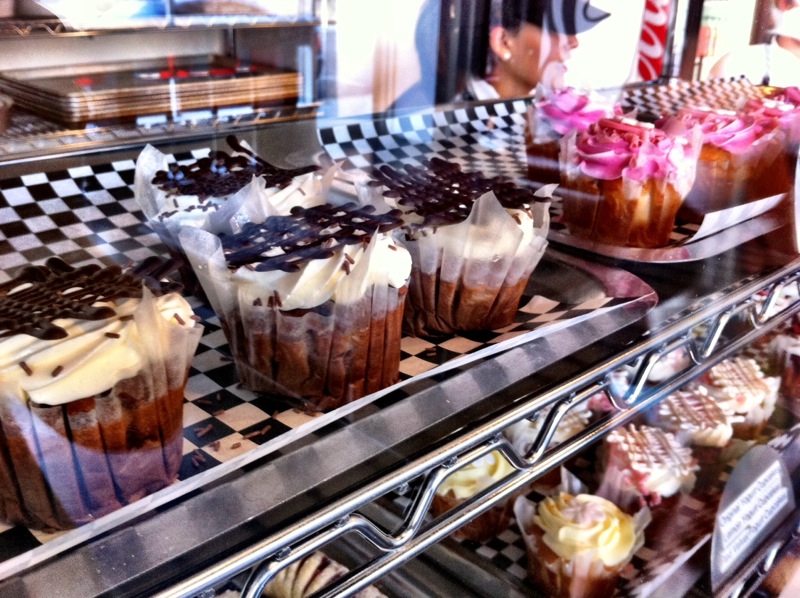 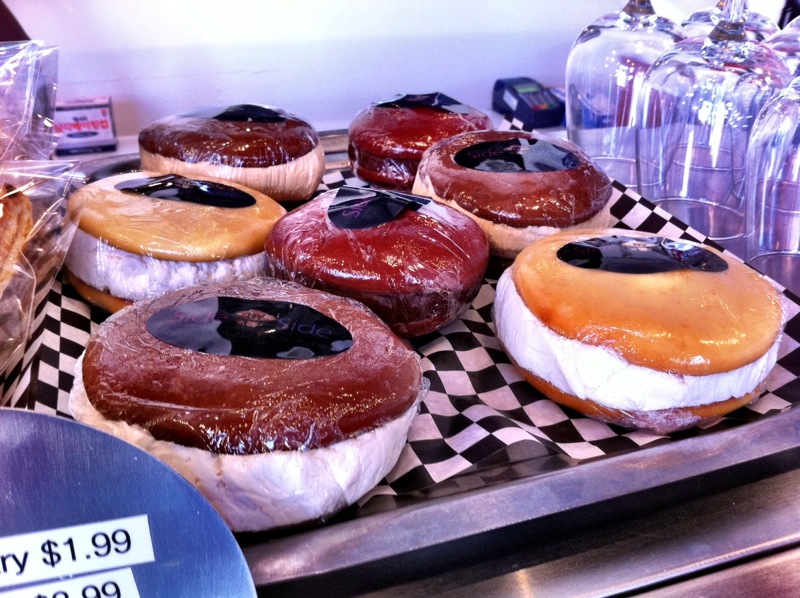 The place was small and had a fairly modern design.  The desserts were displayed beautifully in a bakery case, everything from eclairs to cheesecake, creme brulee and black and white cookies.  They even had hand-dipped ice cream.  We stood there for a looooong time trying to decide what to get before choosing a whoopie pie, tiramisu, a strawberry macaron and a cupcake.  Everything was reasonably priced and we ended up spending only $13 for all our goodies.

Our least favorite item was the Tiramisu.  It was not at all traditional tiramisu; instead of ladyfingers it was layered with cake that had been soaked in coffee (at least I think it was coffee…it wasn’t strong enough at all).  Between the cake layers was something like a basic vanilla custard or pudding, not the usual mascarpone or even cream cheese type filling.  And there was not one hint of rum, which is one of my most favorite parts, so that was disappointing. 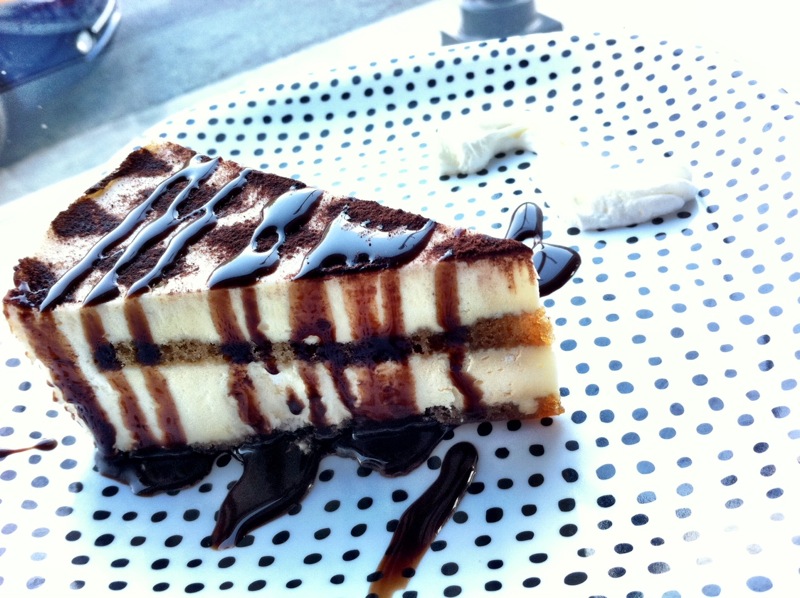 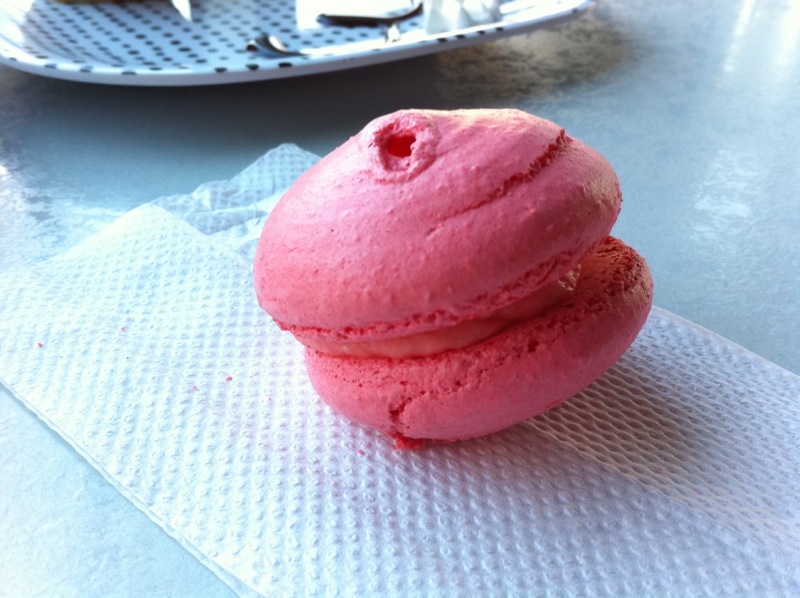 We decided the White-on-White Whoopie Pie (yes, it is as massive as it looks!) was runner-up to our favorite, only because of the buttercream.  The cookie or cake or whatever it was on the outside, was seriously odd.  It was tough and not even close to having a cake-like texture and was not soft enough to be a cookie.  Very strange.  Jeremy and I sat there trying to figure it out and finally gave up.  But like I said, the buttercream was the only redemptive part of the whole thing…very light, airy and delicious.

Finally, the one thing we actually liked (sort of) was the Original Vanilla Yogurt Cupcake.  The girl that was working told us that their cupcakes were made with yogurt (hence the name), which gave it a super moist texture.  And it was very moist.  It was also kind of pound-cake like.  Again, unlike any cupcake I’ve ever had.  It was topped with a homemade whipped creamed, strawberry chocolate curls and white chocolate. 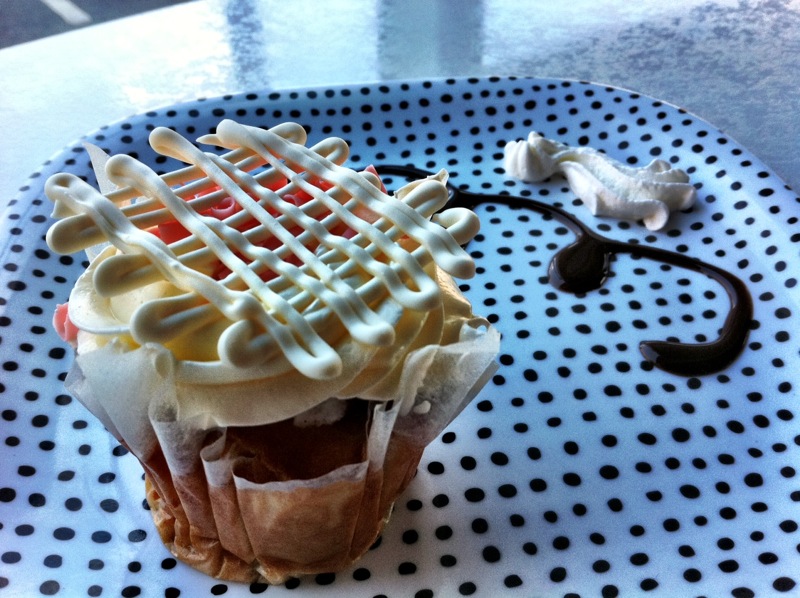 Overall, everything was honestly kind of odd and I can’t say that I want to go back anytime soon.  Maybe for a cupcake since we did like that.  And the ice cream sandwiches looked good also.  Let me know if you’ve been or if you plan on going…I’d love to hear your thoughts!